Dr Radic uses robotic assisted knee replacement as one of many tools to optimise his patient’s post-operative function and long-term survival of the knee replacement. Dr Radic places a big emphasis on optimising alignment on an individual basis during knee replacement surgery, which involves the use of many different technologies including robotics, computer navigation and patient specific alignment. 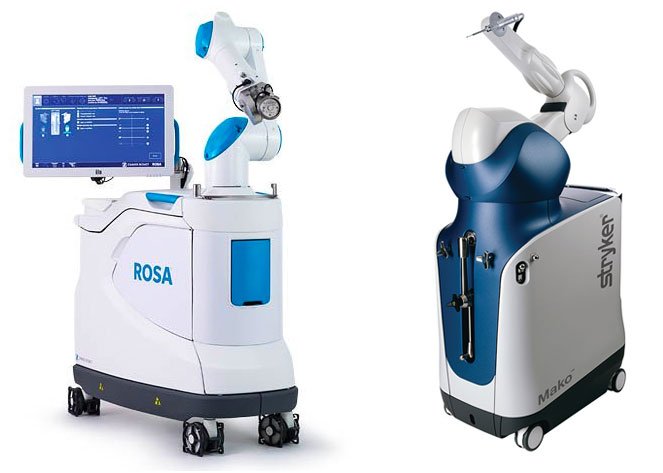 The ROSA™ and MAKO™ are two types of robots used in robotic knee surgery.

What is robotic knee surgery?

As is the case in many industries, robotics and computer-based technologies are being used to improve the accuracy and efficiency within orthopaedic surgery. Robotic assisted Knee Replacement involves the use of a robotic arm, which is controlled by the surgeon to assist in planning and placement of the knee replacement components. Its use is becoming more widespread in facilities both in Australia and Internationally, with Dr Radic offering Robotic Knee Surgery (Partial and Total Knee Replacement) at Hollywood Private Hospital.

What happens in robotic knee surgery?

Robotic knee surgery is not automated – Dr Radic is still performing all tasks such as making the skin incision, exposing the knee joint, cutting the bones, placing the implants and closing the incisions at the completion of the case. Rather, the ‘Robotic’ element of the surgery is to guide the cutting of the bones to help optimise positioning and accuracy of the placement of the knee prosthesis.

What kind of implants are used in robotic knee surgery?

The implants (prostheses) that are inserted in to your knee during robotic knee surgery are the same as those used in more traditional methods of knee replacement surgery. These are not customised to individual patients, but rather there are a large number of sizes and options of implants which can be combined in many different ways to match your natural knee positioning.

The robotic systems currently available make use of a robotic arm (ROSA™ and MAKO™) or a computer controlled hand-held burr (NAVIO™). Both of these systems are positioned next to the patient draped in sterile covers, to enable use of the robot without ‘desterilising’ the surgical field.

Robotic assisted knee replacement surgery is still relatively new, so there is no clear evidence to suggest it is superior to other methods of knee replacement positioning in terms of post-operative function and prosthesis survival. There is some evidence in the Australian Joint Registry to show Robotic Partial Knee Replacement surgery is performing very well, but it’s important to note this is often compared to older prostheses and methods so it’s not necessarily a fair comparison.

In Australia, there has always been a strong uptake of new technology when concerning knee replacements in comparison to many other countries. As a result, the improvements in outcomes with the use of robotic knee replacement in other areas of the world might be more profound than the benefits that are seen here in Australia. Still, the technology is a very useful tool, and can help the surgeon in the planning and placement of the knee replacement which is ultimately a good thing.

What are the advantages of robotic knee replacement?

What are the disadvantages of robotic knee replacement?

All surgery, including robotic surgery, involves risks. To discuss your options for robotic knee replacement surgery or for any further information please contact Dr Radic to arrange a consultation.