Robotic assisted Knee Replacement involves the use of a robotic arm, which is controlled by the surgeon to assist in planning and placement of the knee replacement components. Its use is becoming more widespread in facilities both in Australia and Internationally, with Dr Radic offering Robotic Knee Surgery (Partial and Total Knee Replacement) at Hollywood Private Hospital. 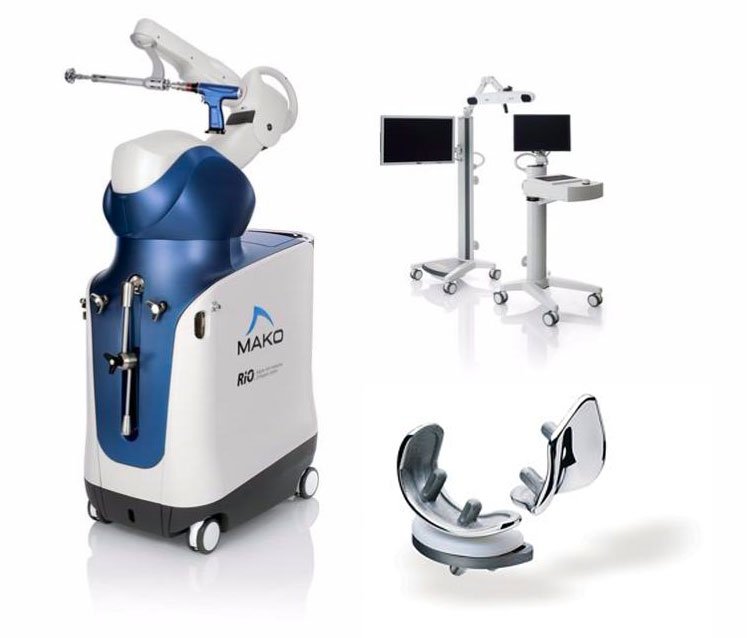 What is robotic partial knee replacement?

Partial knee replacement was the first area where robotics was implemented in to orthopaedic knee surgery. It has been used in a research capacity since 2006, and more recently is available for widespread use in the clinical setting.

In robotic partial knee surgery, only the damaged portions of the knee are replaced. The knee can be divided in to three areas, the medial (inside), lateral (outside) and patellofemoral (knee cap) compartments. The robotic arm assists in resurfacing the damaged portion of the knee, but prevents damage to the healthy areas.

Prior to surgery, pre-operative X-rays or CT scans are obtained to generate a 3D model of your knee. This aids in ‘pre-planning’ your knee replacement. During surgery, a computer is used to match the pre-operative plan to your knee, and a robotic arm is used to assist the surgeon in placing the prosthesis in the optimal position.

Recovery after robotically assisted partial knee replacement is the same as for conventional partial knee replacement. You can expect to stay in hospital for 1-3 days, and may require crutches or a stick for up to 2 weeks after surgery. It’s important to elevate and ice the knee regularly to reduce swelling, and work on regaining the movement in the knee. A physiotherapist will visit you twice daily whilst in hospital, providing you with exercises to complete after discharge to ensure a faster recovery.

All surgery, including robotic surgery, involves risks. To discuss your options for robotic knee replacement surgery or for any further information please contact Dr Radic to arrange a consultation.